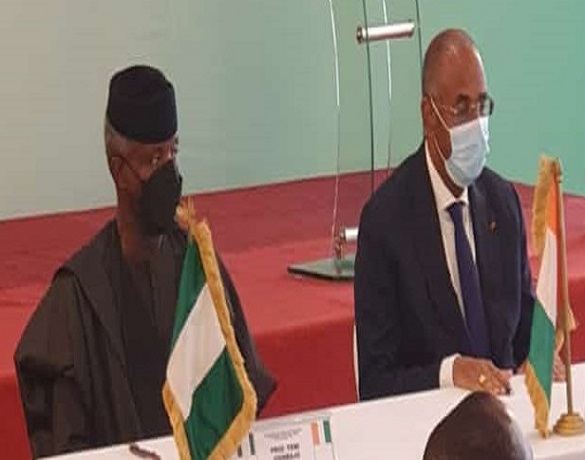 This was the high point of the second session of the Ivorian-Nigerian Joint Commission of Cooperation, which held from 4th to 6th November 2021, in Abidjan. This Agreement, which is expected to further deepen collaboration and mutual cooperation between the two Countries will be implemented by the National Agency for the Prohibition of Trafficking in Persons (NAPTIP), for and on behalf of the Government of the Federal Republic of Nigeria.

The objective of the Agreement is to develop a common front to prevent, and punish, trafficking in persons by sharing of intelligence and sensitization campaigns in both Countries; to protect, rehabilitate and reintegrate victims of trafficking into their original environment and to promote friendly cooperation between both countries.

The high-level delegation of the Federal Republic of Nigeria was led by His Excellency the Vice-President, Professor Yemi Osinbajo, His Excellency Ambassador Zuberu Dada, Minister of State, for Foreign Affairs, Ambassador Mariam Katagum, Minister of State for Industry, Trade and Investment, Dr Fatima Waziri-Azi, The Director-General of NAPTIP, as well as several senior government officials and representatives from various Ministries, Departments and Agencies.

This development came on the heels of the renewed commitment and strategic focus of the Director General of NAPTIP to strengthen ties with Anti-Trafficking Agencies within the West African subregion to effectively curb human trafficking. The Director General, in an interactive session with the Ivorian counterparts, discussed current trends of trafficking, shared concerns and challenges in the fight against human trafficking, and pledged their commitments towards jointly curbing trafficking in persons.